I left home so that I could come back and remember why I love the land. I left so that I could miss it. I left while I still had the freedom to do so. So that when I go back, I am ready to defend it.

I left because Israelis are annoying.

In a souvenir shop, I search for the perfect wooden perfume trinket. I want one with a rose and a girl. I find one, but the “B” is cracked in “BULGARIA.” I sit on the ground and comb through the carved wood until the shop owner takes the basket from me. She puts it on her counter, digging out all the different designs herself. I find the perfect one, but I’m short a lev. She lets it slide. I’m being so annoying.

I see a girl in Plovdiv (the European Capital of Culture for 2019) take pictures in front of a gorgeous mosque. I take my jacket off and start posing. I know how absurd I’m being, thinking it’s ironic in a referential way to the girl who posed before me. When I’m done, I’m told some boys are making fun of me. So? 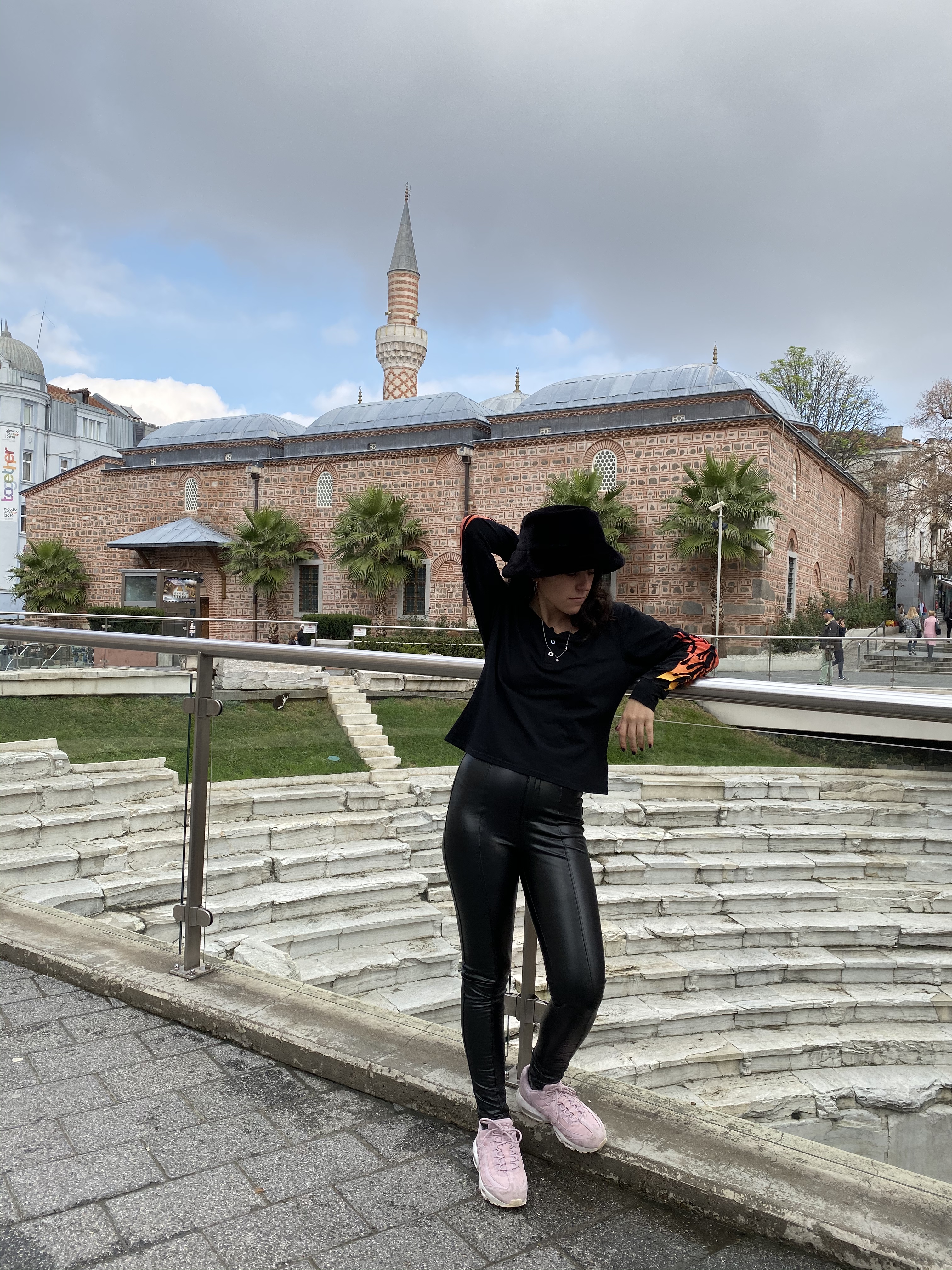 I’m at the Museum of Socialist Art. Somehow I end up in the screening of a Bulgarian film with English subtitles about Bulgaria’s socialist days. It seems like it was nice. They were very productive. Very patriotic. But the movie stretches beyond 15 minutes (not even Independence Hall pulls that, though I could watch hours of archived Zionist propaganda footage). So we leave. The movie is playing specifically for us, just two people, but we want to see the socialist art.

At pizza I misplace my card (the one that wasn’t flagged by the bank for suspicious activity in the Balkans). I’m ready to pay, but the plastic I need isn’t in my wallet. I empty out my entire backpack, dumping it on a table parallel to the checkout counter. I dig through my junk, wondering where in the utter heck I put my card. The man trying to check me out is awed. Apparently he hasn’t had much contact with boundary-defying people. He must not know any Israelis.

My card is in the card-sized pocket of my backpack, which makes sense. I get my pizza.

I count four pairs of combat boots on the metro, belonging only to the six or so people sitting across from me. In my country, combat boots go with guns or backpacks; they don’t usually accessorize winter outfits.

The relics of communism are visible in the edifices of structures. The architecture echoes a time that just barely was. I don’t know enough to know if it also still exists in bureaucracy and institutions, like health care. In my country, socialism was the foundation, not a passing fad that ended in revolutions and ugly buildings.

There are Nazi pins at a stand in an outdoor market. According to a man from the synagogue, meinkampf is still in print. Bulgaria never sent any Jews to camps, though. Yet in ‘48, 90% of the Bulgarian Jewish population made Aliyah.

There are so many gray, ugly buildings, but there are more monuments. More food. More life in Bucharest.

At the Christmas Market on Union Day, I push. I am unapologetically annoying. The crowd swells, and in it I exist. There is joy in a space with no space.

I wait in a line for a trdelnik-type thing for over an hour. My toes go numb. I can’t feel my fingers. There are three people in front of us, finally. They ran out of the sweet logs. Now what? We walk home in defeat, our feet gradually gaining feeling again. There’s a non-stop kabob place. I stop.

“Baklava? Something sweet?” I ask the man.

“We have baklava, but only two pieces,” he tells me.

I follow him to another window, where he hands me the logs of baklava in individual napkins. I begin to take out my wallet.

We go home with our consolation desserts, sweeter than some Romanian sweet bread could ever be*. (*Not that we’d know).

I fall asleep at a Starbucks. Also, on a bus. A train. I read my second Etgar Keret book. I read quicker than I used to. A man tells me to take my foot off my seat of the train. He is right that I should, but he is not right in trying to tell me how to behave. I’m not embarrassed or afraid. I tell him that how I behave is none of his concern, באמת אחי. Even when he tells me I should behave “politely” I don’t back down. He’s sitting across from me g-d damn he’s a fucking asshole. Doesn’t he know Israelis only take orders when in uniform? He can go…

If I were older or a man or not ostensibly an American, would I have gotten talked down to? Told how to behave? In Israel, a commander with too many symbols on his uniform told me the same thing, but we were in Israel and he was in uniform. His uniform alone warranted respect, yet he also prefaced the command with שנה טובה. Here, I am an American tourist. A girl, not a woman. Someone who somehow deserves to be told by a stranger to “behave more politely.”

I have a degree in words and those words aren’t for keeping in my head.

I’m ready to come back. I miss home.