You get off the bus – making sure to thank the driver as you begin your decent down the steps – and follow along, up the slight incline of the paved parking lot. Through a gate, past a small kiosk selling coffee and candy and chips, and straight to a line for the bathroom, because you know how these visits go. You know that the next few hours are going to be long and arduous and that if given the opportunity to pee, you should pee. So you pee and then you rejoin the group as you take in what lies ahead.

Nothing is new, but as you stare at the welcoming topiary, you are reminded of the entrance of Disneyland, with Mickey Mouse’s face formed by shrubs. In the same way, these bushes beckon you in to what lies ahead, not indicating the sober air that the day will inevitably evoke.

You climb a bit, settling down in a circle on some gravel to engage in an activity. Scenarios are read from cards and placed on a spectrum. You don’t agree with the final placement of the cards, but other people have louder voices than you, especially when you take a verbal backseat. It isn’t until the matter of defining the ideology that determined the scale arises that you speak. You speak and you define, saying more in one comment than you could have ever said fighting for a placement of an inconsequential card with a hypothetical scenario.

The activity concludes and you shuffle down, back to the bathrooms, and then up, but up a different path than before. You sit and listen to a woman tell you about a history you know and embody, and then the tour begins.

You lag behind, taking in everything at your own pace. You don’t need a tour guide – you could probably guide a tour, if anyone asked. As you approach the focal plaza, you see the flags and the namesake of the mountain.

There, before you, is the grave of Theodor Herzl.

You’ve been here before. But before was different. Before was as a visitor. Now is as a resident. More than a resident, you are paying your respects to Herzl as the manifestation of his dream, as a new olah, a Zioness, someone who believes wholeheartedly in the Zionist project that he only had the chance to begin.

This time, as you block out the tour guide’s story, you stare past Herzl’s grave and notice Jerusalem. There, past the founding father’s resting place, is a modern Hebrew city, just as he envisioned. 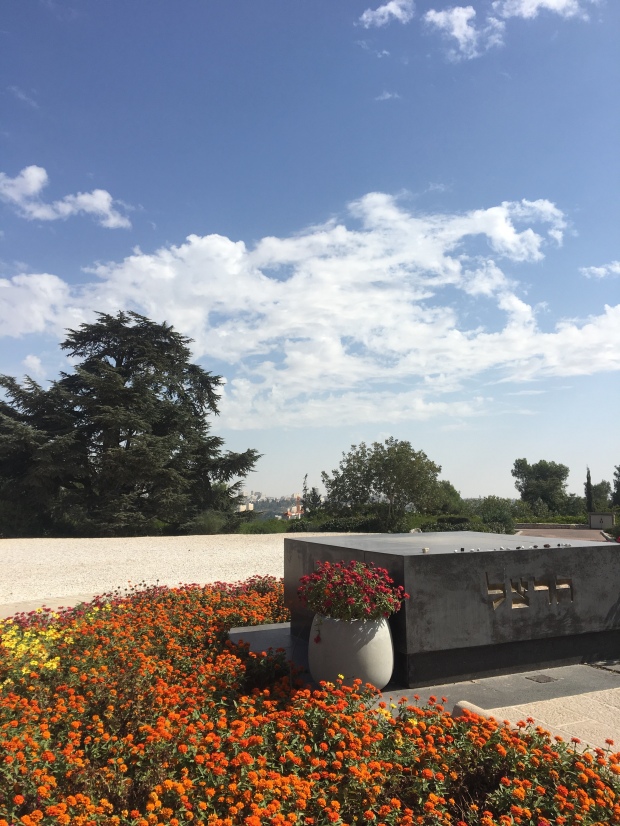 All you can think about is how much pride you have for this country—for your country.

As you wind your way past those of “high” import, you can’t help but be shocked that the tour doesn’t stop by Rabin or Golda. So on your own, you send your regards and respect to the assassinated Prime Minister and then to Golda. There’s another tour group stopped at Golda, but you need to leave her a stone. So you do. Golda, forever.

The rest of the way up and down you take your time. You read the names. You read the stories. You read the places. So many soldiers lost their lives at such young ages and for what? For this country, apparently. It’s a hefty sacrifice to give up at 19 or 21 or even 35. There are so many individuals who passed too soon at the hands of terror and fighting terror. They wore green fatigues, and so will you.

At one of the graves, you stop.

Aviha Moshe, age 43 when his life was taken.

In the space that most of the graves say “was born in Jerusalem, Israel” or the like, Aviha’s says, “was born in Israel.”

Something about foregoing the city and just having the land strikes you. There is unity and belongingness in being born in Israel. He was a son of Israel. A son of the country. A son who gave his life to the country.

You breathe in the heroism of the tragedy seeped within the space. You breathe in for Aviha and the rest of the sons and daughters who rest in the mountain. You breathe in for the Ethiopians who perished on the journey to Jerusalem, never making it back home in their lifetime. You breathe in for all those that can’t breathe anymore, and when you breathe out what remains is respect, pride, and the strengthened drive to serve this land, this country, and these people.

Could you put a shot of espresso - short, no sugar - inside a hot chocolate? Thanks, there's no mocha here View all posts by Sophie Jacobs